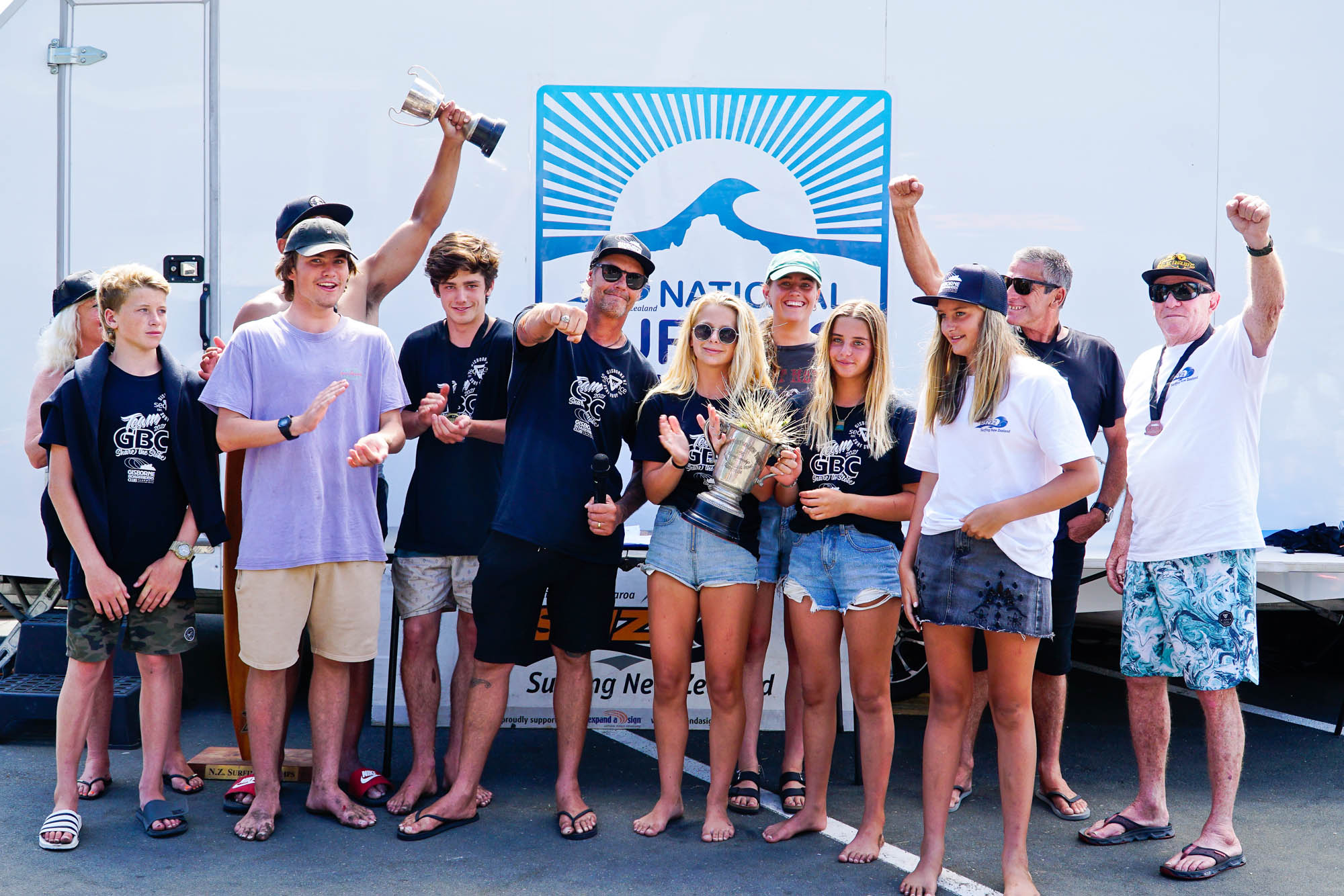 Photo: Gisborne Boardriders Club regained No. 1 status in the country with eight titles at the national surfing championships at Piha.

“He'll have a big grin on his face up there. Hopefully, I've done him proud,” said the 19-year-old, whose performance was made even more special by brother Finn winning the under-18 boys' final immediately before her.

The siblings were jointly awarded the Byers Trophy for best overall performance at the nationals and they were integral to Gisborne Boardriders Club winning the overall club crown and regaining No.1 status.

His daughter said she wrote his initials on her hand before the final, saying “you can do this for AV”.

“It definitely motivated me and made me a bit hungrier for that win.

“I had little sayings he told me before my heats going through my head in the final. It reassured me that I could do it.”

Vette had a challenging path to victory, surfing against what was described as one of the most talent-laden field of finalists ever — World Tour surfer Paige Hareb (Taranaki), former world junior champion Ella Williams (Whangamata) and defending champion Ava Henderson (Christchurch).

She faced a nervous wait on the beach for the final scores to be announced after Williams came back in the dying minutes with an 8.15 ride.

“I had no idea how well Ella (Williams) surfed her last wave and I knew it was going to be really close,” said Vette . “Hearing Ella's name announced in second place was just unreal. I was so thankful.”

Vette said the conditions were similar to her home break, Northerns, which she surfs every day. But she knew it would be a tough final.

“I love being, as they say, the dark horse and proving everyone wrong.”

It was Vette's first time competing solely in the women's division, and she said she had been working towards winning the open title for several years.

The feeling of hearing her name being called out on the beach as the winner was indescribable and the victory still hadn't sunk in when The Gisborne Herald spoke to her last night.

“There's so much pride with everyone, myself and my family — everyone that you represent and your sponsors. You know you've done them proud,” said Vette, who won the u16 and junior (u18) titles in 2017 and the junior title again in 2019.

She was the first Gisborne surfer to win the open women's crown since Airini Mason in Dunedin in 2011.

Finn Vette surfed only three waves in the junior boys final but two of those were good enough for a 15.1 total and the win. Kora Cooper (Raglan) was second on 13.85, Tom Robinson (Whangarei) third on 12.2 and Jayden Willoughby (Raglan) fourth on 9.1.

The club also won the open women's and junior boys' divisions earlier in the week.

Procter said he went into the event with no expectations and it was a special feeling to come away with the title, adding it to wins in 2009 and 2013 (also at Piha).

The local longboarding scene also deserved credit for growing a “hotbed” of talent in Gisborne that had lifted the level of surfing, he said.

“Back home I usually don't even make the final. It shows you the level of surfing if the national champion can't make the final of a local club competition.”

Procter thanked Gisborne Boardriders, who he said had helped to grow a strong sense of connection in the team at the champs.

“We were the only real region you could feel a sense of connection across all of us. We were down there every day supporting other surfers across the event.”

“It shows the work at the club level is actually paying off. Not just in performance but supporting one another and going as a team.”