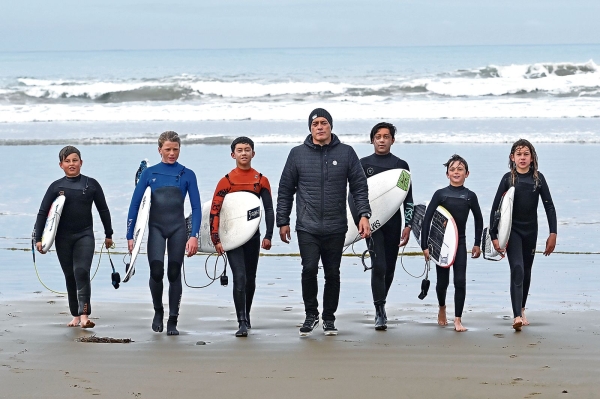 Budding young surfers from around the country have descended on Gisborne this week to learn the ropes of high-performance surfing.

This year, all 16 spots with Grom Lab were sold within two hours of going on sale.

Grom Lab head coach James Fowell said he developed the programme five years ago after being approached by Andy McCulloch and Andy Vette “to create an environment for younger kids to get elite coaching”.

“My passion for the sport is the thing that motivates me to get in behind our youngsters,” Fowell said.

“When they leave (the camp), they should understand every aspect of riding a wave from the start right through to the end.”

Fowell has taken New Zealand’s junior surf team to six world champs, which took him all over the world.

“It was an eye-opener to see the level we have to be at,” he said.

He runs the programme with friend and colleague Matt Scorringe. They’ve known each other for years through surfing and coaching.

When Fowell was approached to start the programme, Scorringe was his first choice as partner because of his background and skillset.

Scorringe is now head coach of New Zealand’s Olympic surf team and has travelled the world through his coaching business.

Previously a Billabong-sponsored free-surfer, he’s the founder and owner of The Art of Surfing, for which he was recognised with Waikato’s coach of the year award in 2015.

Fowell said that Scorringe could see things in surfing he had never even thought of . . . his ability to break down surfing into manageable components was unmatched.

This week the Grom Lab has been travelling all over Tairawhiti in search of waves. When conditions have been poor, they’ve been at the pool practising paddling and duck-diving techniques, or down at the skatepark practising aerial manoeuvres.

Every Grom Lab surf session is video-recorded. The replays are reviewed and broken down to assess and improve technique.

The coaches overlay the young surfer’s move with a video of someone doing the manoeuvre “absolutely perfectly” to compare the differences, Fowell said.

“We can identify the areas of development for our kids; it might be something as simple as where they’re looking, where their head’s facing or where their arms are. It’s an in-depth analysis of their technique.”

He said it was the first time many of the young surfers got to experience elite-level coaching.

“Groms who sign up for a camp like this have generally worked out that they see surfing as something they’d like to pursue at more than just a recreational level.”