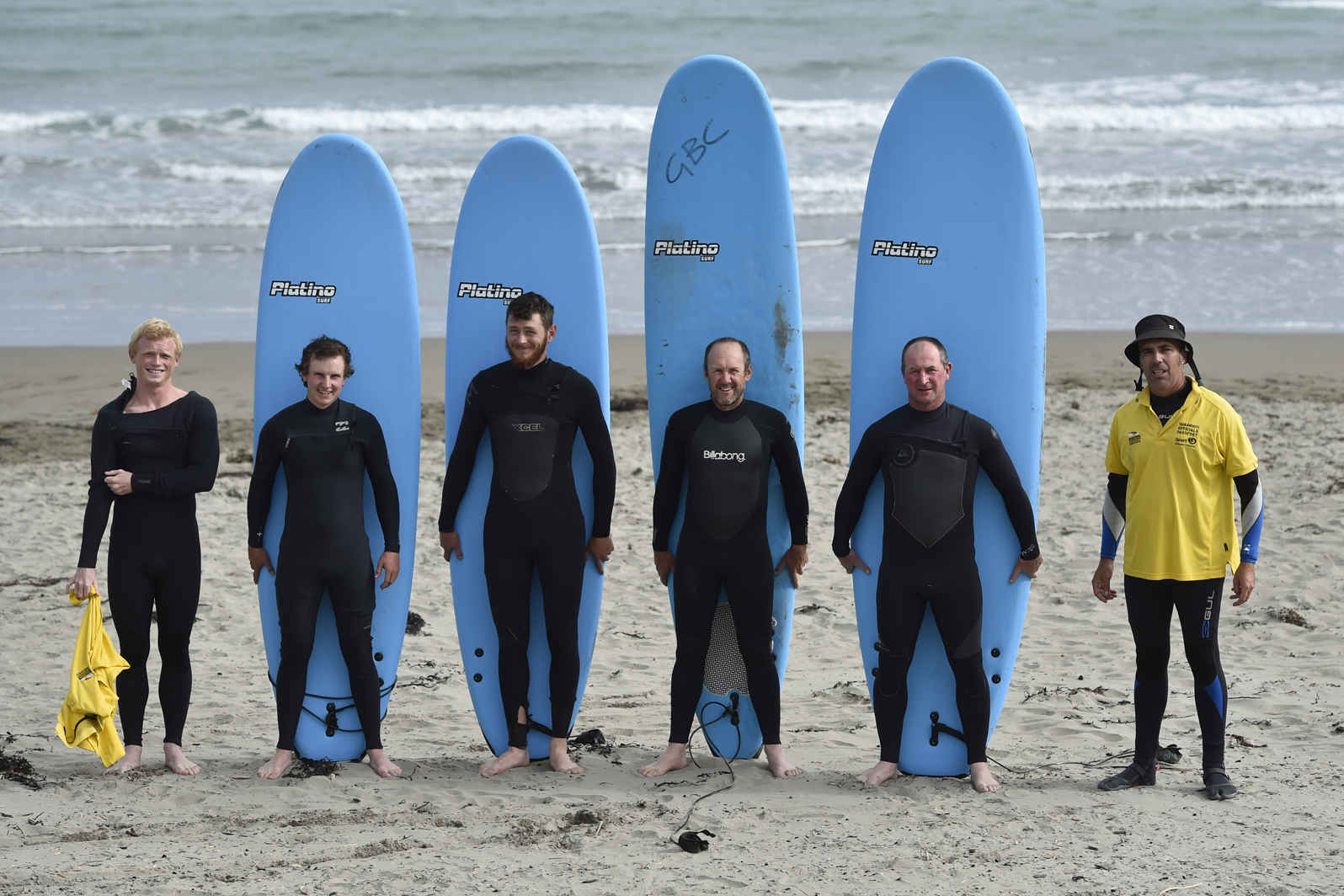 Surfing for Farmers is just the excuse some people need to shut the farm gate and de-stress in the surf. Grant Miller reports ...

Those who work the land often live on the same piece of ground.

It can be difficult to shut the gate on pressures associated with farming — keeping stock in sound condition, watching the weather, managing debt, cash flow, resources and relationships. If the grass isn't growing, or crops look vulnerable, reminders about that come often.

One antidote to ever-present stress is to get off the land and into water.

Sam Hain drives for about 45 minutes on Tuesday summer evenings to get from his sheep and beef farm at Pehiri to Gisborne's Midway Surf Life Saving Club.

“It's worth every minute to get here and surf,” he says.

“It's very different to the everyday.

“After two hours here, I've got a big grin on my face.”

Hain was at the first week of Surfing for Farmers when the initiative started in Gisborne last summer and has remained enthusiastic about it ever since.

“When you tell people you're from Gisborne, they assume you can surf,” he says.

“But it's one of those situations where you don't go and see the sights at your own front door.

“I had hardly been to the beach before.”

That's one attraction of Surfing for Farmers — most people there are new to surfing and there's camaraderie in being “like a fish out of water” with others.

“We encourage each other and share in the accomplishment when someone catches their first wave.”

The attendance covers the gamut from school leavers to people aged in their 60s and includes farmers, farm staff and farm support professionals.

Surf boards, wetsuits and coaching are provided through the Gisborne Boardriders Club.

Sponsors, many of them providers of rural services, were quick to back the programme. And what started in Gisborne has expanded to Mount Maunganui and Canterbury this summer.

It's not that farming is necessarily gloomy. It has its ups and downs and lifestyle benefits. But creating a reason to get outside the farm gate and do something different is positive, Hain says. The surfing also leads to different conversations from usual, like at the end of the Tuesday gatherings when people in attendance share banter around a barbecue and refreshments. “We give each other stick most of the time,” Hain says.

The man who led the creation of Surfing for Farmers, Stephen Thomson, describes the vibe as low key — “super easy, super relaxed”. It's social, but based around a healthy activity, and has a sort of grassroots appeal.

The idea came to him one wintry, rainy Saturday in 2018, when he watched a short Netflix documentary with his wife Nicole. It was called Resurface, telling the story of Bobby Lane, a United States Marine Corps veteran who was on the verge of taking his own life before he tried surfing, which turned out to be a source of peace for him.

Lane suffered two traumatic brain injuries when his platoon was hit by roadside bombs in Iraq. When he returned home, he suffered from post-traumatic stress disorder, was afflicted with nightmares and had to take a cocktail of pills. He saw suicide as his way out but wanted to cross surfing off his bucket list first. Lane linked up with Operation Surf, which promotes “surf therapy” for war vets, and it made a profound difference to his life.

Thomson, who worked as a rural consultant for AgFirst before a recent move to Bayleys Real Estate, has substantial connections to the Tairawhiti and Wairoa rural community and he wondered if he could adapt the concept for farmers.

“I put out a few feelers to see if people were interested.”

He was surprised how quickly a dozen sponsors agreed to come on board.

Turnout would be the real test.

Twenty-five people turned up for week one and, into its second summer, the Surfing for Farmers' attendance at Midway remains steady.

“We have father-and-son combinations and families.

“Most of them had never surfed, so they have a coach to help them out. The involvement of Gisborne Boardriders is key.”

Duncan Cook, who manages a sheep and beef farm at Tolaga, says he works right next to the sea but he never used to even go for a swim. He had read about Surfing for Farmers and saw it on Facebook posts but put off getting involved.

“I saw Stephen at a sheep sale. He twisted my arm to come down on a Tuesday.”

“It's a massive thrill, catching a wave,” he says.

“I tried a bit of bodyboarding at school and I borrowed someone's surf board to give surfing a go but I could never stand up on it.

“I can actually go along on a wave now.”

His wife Sophie Cook signed up for the Boardriders' Mums on Waves programme last year and the couple have a two-year-old daughter who “loves the whitewash”, Duncan says.

“We can get pretty much anyone up and going.

“The biggest reward for a coach is helping someone who says they're never going to get up, and seeing them achieve it.”

Bub says it's nice to see a mix of people at Surfing for Farmers. “They're definitely getting better, especially some of the younger ones.”

“Our agricultural community has had a good year with lamb and beef prices,” Scott says.

“But farmers are on the job all the time, and stress can be exacerbated during drought. Sharemilkers can face incredible stress.”

Last year, New Zealand's suicide numbers hit the highest level since records began, with 665 deaths in the year to June.

Although access to health and wellbeing services is more difficult in rural areas, various forms of help are available. “It's important that farmers have strategies related to de-stressing and can access support,” Scott says. 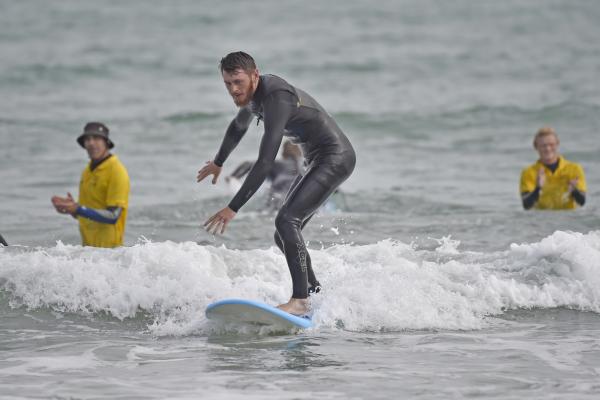 Mahia-Gisborne professional surfer Ricardo Christie isn't familiar with farming but he's a believer in the restorative powers of surfing.

“Surfing helps me re-charge when I've got lots on my plate,” he says. “Just to be in the ocean — getting into the water, connecting with nature and letting go — it helps.”

Christie has followed the progress of the Boardriders and their programmes, including one where under-privileged children are introduced to the sport.

“They're doing some cool stuff.”

Ballance Agri-Nutrients nutrient specialist Lucy Holden describes herself as a wannabe surfer. “The others don't seem to struggle as much as I do,” she says.

Successful surfer or not, she's pleased to be part of the programme.

“No one comes out of the water feeling worse.”

Backing Surfing for Farmers was an easy decision for the farmer-owned co-operative, as it was a chance to “support farmers outside of farming”.

Jack Dustin was a coach in the Gisborne programme last summer and then he moved to Mount Maunganui.

“I loved it and I wanted the programme to happen at the Mount.”

He is a driving force in getting it up and running there and is head coach. Dustin says there is no excuse for people not to learn.

“All you have to do is rock on down and get stuck in.”

Michael Fox, head of communication and external relations at Zespri International, says the kiwifruit company was keen to be part of it.

“We initially came across Surfing for Farmers on social media and were really impressed with their Gisborne programme. We got in touch with Stephen Thomson to see if it was something we could look to bring to Mount Maunganui to help support our Bay of Plenty growers and farmers.

“We recognise some times of the year can be stressful for those who work in the primary industries and we want to help look after people. Plus, there's great evidence in the benefits of spending time in and around water for wellbeing.”

The company hopes “even more growers and farmers take up the opportunity to learn a new skill, spend time with their fellow industry friends and take some time for themselves off the orchard or farm”.

One indicator of success is that some new surfers have gone on to buy their own boards and wetsuits.

“Farming is not a nine-to-five job. Farmers never stop caring about livestock or the condition of the farm,” he says.

“Surfing for Farmers creates a reason to get off the farm and have a break.” 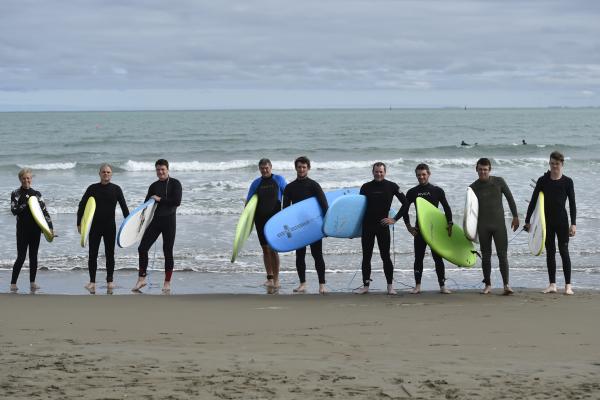