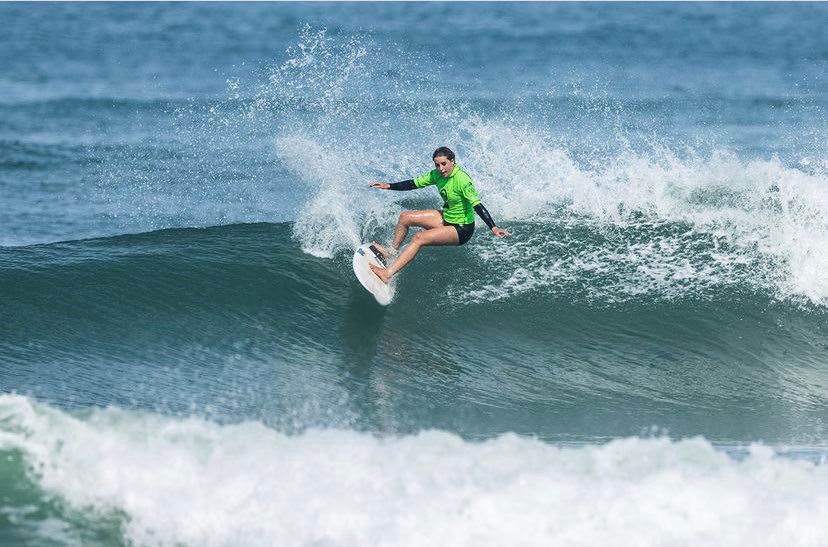 Conditions are expected to be smaller than the 1.5-metre surf the open men's competitors enjoyed yesterday.

Braithwaite will hope for bigger waves as the week progresses, so that her experience riding some of the heaviest surf in Indonesia can come into play.

In the latter part of New Zealand's winter, Braithwaite, 16 at the time, accompanied her father, Patrick “Magoo” Braithwaite, on a trip to the island of Nias to take on some of the biggest, heaviest surf in a country renowned for big, heavy surf. She loved it.

The approach of tropical cyclone Hale may come into play in the second half of the week. Braithwaite will be watching its progress with interest. She is also contesting the under-18 women's division.

The 2021 open women's national champion, Gisborne's Saffi Vette, is not surfing at the nationals as her recovery from an ear operation meant she could not do the preparation required.

Gisborne's representatives in the u18 men's division, Max Phillips and Gabe Lobb, were eliminated in the heats yesterday, with heat totals of 6.90 and 6.85 respectively.

Lobb will also contest the u16 division, along with fellow Gisborne Boardriders Club surfers Shea Ferguson, Ollie Tong and Jett Dalton. Tong will also compete at u14 level.

Matt Tong will compete in the over-35 men's division.

The 1975 national champion, Benny Hutchings, will contest the o60 division.

Stella Smith, the first New Zealander to win a world championship medal in stand-up paddleboard surfing — bronze in 2018 when she was 16 — is entered in the women's SUP and women's longboard.

New Zealand SUP representative Sean Hovell will be among the contenders for the men's SUP title.

The big guns came out blazing at Piha yesterday.

Most of the top seeds in the men's open won their heats comfortably on Day 1 of the 60th edition of the national champs.

Cutmore's road to the second round was a lot smoother than that of second seed Daniel Farr (Taranaki), who won his heat despite a small total of 11.40 to start his title defence.

Farr did record a 7.40 ride early in the heat but couldn't find a strong second wave.

Clean conditions for the preliminary rounds

Piha turned on clean conditions for the preliminary rounds.

The surf remained 1.5 metres all day with variable morning winds turning to sea breeze in the afternoon.

Eight-time national champion Billy Stairmand had a convincing heat win, scoring 14.50. He will have to surf through three more rounds to make the final and earn a shot at a ninth title.

Late in the day the under-18 boys rounded out proceedings, surfing through to the quarterfinals.

Raglan's Navryn Malone — son of Gisborne's 1998 national champion Chris Malone — recorded a day-high score of 16.35 out of a possible 20 to advance through to the final 12 surfers. It won him the Volkswagen x Skinnies Highest Heat Score Award for the day.

Bill Byers (Piha) was also impressive, surfing to a heat total of 13.55.

Taranaki groms Kalani Louis and Spencer Rowson won both of their match-ups yesterday. Rowson looked sharp on his backhand with a seven-point ride in his first heat and an 11-point total in his second.

Today, New Zealand's top female surfers start their competition, and the open men's division will contest another round. Several rounds of the junior divisions for both males and females will also be held.

The surf was expected to decrease slightly today. Variable winds are forecast before the middle of the week, when tropical cyclone Hale is expected to make its presence felt.

Over 440 entries have been received for the national champs. This is the 15th time the event has been held on the west coast of Auckland. A total of 29 divisions are being contested at the event. They include the premier open men's and women's contests, age groups from under-14 boys and girls through to over-60s for males and females, and longboard, stand-up paddleboard, bodyboard, kneeboard and adaptive disciplines..

This event marks the start of the domestic New Zealand Surf Series, the NZ Grom Series and the NZ Longboard Series. Fifteen events are scheduled to take place around the country this summer.