The Gisborne Boardriders Club decided in 2012 to “connect with their past” and recognize the successes of some of their members with a Hall of Fame Award as well as the contribution of individuals for their service to the club, with a separate Life Membership Award. The initiative was started by previous committees but has taken time to establish the criteria. Now it is in place, it is expected successive committees to continue the process of looking into the club’s proud history and recognizing those individuals who have played a major role.

An obvious recipient of the Hall of Fame award was Maz Quinn, whose multiple national titles and success on the Australian Pro Junior Series, WQS and then becoming the 1st NZ surfer to qualify for the WCT makes him one of the most recognized names in NZ surfing. The club decided it was appropriate to present the awards at the recent Quiksilver King of the Groms event, that Maz helps stage in Gisborne each year. Other Hall of Fame recipients were Alan Byrne for his multiple national titles and international achievement, including a 2nd place at the 1981 Pipeline line Masters and the added achievement of being regarded as one of the world’s finest surfboard shapers. John Gisbywas also presented with his Hall of Fame Award for his incredible string of national titles and ISA World Masters Title.

The Life Membership for Service to the Club has not gone back far into the Club’s history, but the 1st people recognized were Margaret Hansen, Gary Quinn and Craig “Bondy “ Morton. Although not working alone, these people were singled out for their significant contributions of time and energy. They were the driving force behind the Club at a time when talent was being developed and their commitment and focus paved the way for an era when Gissy Grommets were dominating the ratings. 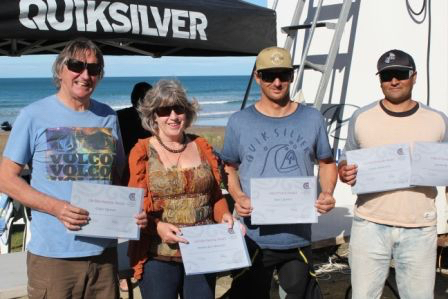