Modern surfing with lightweight fibreglass boards got a real boost when two Americans Bing Copeland and Rick Stoner demonstrated this new form of surfing at the annual surf lifesaving champs at Oakura, New Plymouth in 1959. This was one year after the Hollywood movie Gidget hit the screens. Prior to that wooden surf skis were the popular form of wave riding but quite limited by today’s standards.

The following year, their protégés, a group of Piha lifeguards, including Peter Byers, Buddy Cox and Dave Ritchie came to Gisborne where the champs were being hosted. Each of them had a fiberglass board, all manufactured at Piha. Among the Gisborne lifeguards present was Kevin Pritchard. Kevin along with John Logan, Peter Goodwin, Darryl Heighway and David Swann became Gisborne’s first group of modern surfers. John Logan remembers.

“Some guys from Piha brought these fibreglass boards down here, we called then “zip boards.” We had only ever ridden waves on surf skis but these guys were standing up on boards and riding sideways across the waves.”
Ref Beach Life magazine, Issue 2/Summer/2008-2009. 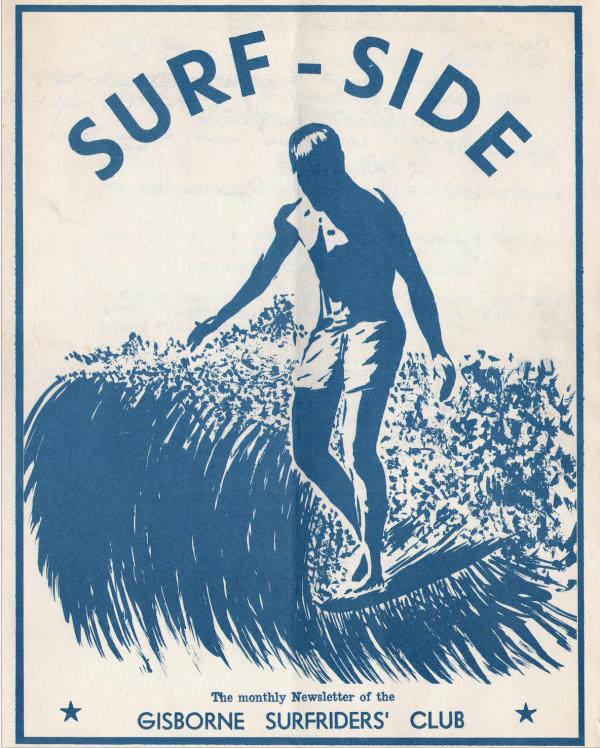 GISBORNE BOARDRIDERS CLUB INC - A Look Back Over The Last 50 Years from Damon Meade on Vimeo.

In 1964, Cronulla surfer Bob Davie came to Gisborne and set up shop as a local board manufacturer. He teamed up with local surfers to establish the Gisborne Surfrider’s Club with the original club President being Des Byrne. Some of the committee members were Dave Burns (Secretary/treasurer), Keith McCullough (Vice-President), Gail Patty, Denzil Owen, Kevin Low, Tom Sawyer and Peter Goodwin.

The first club competition was held at Makarori in August 1964 and the winners were: Seniors, Roger Jenkins; Juniors, Alan Byrne; and Ladies, Gail Patty. The Club continued to run local competitions and hosted the NZSRA champs in both 1966 and 67 with Gisborne surfers doing well in the rankings right from the start. Bob Davie won the Senior title at New Plymouth in 65.

Alan Byrne was particularly noteworthy winning the National Junior title for three straight years from 66 to 68. Gail Patty won the Ladies National Title in 67 and Chris Ransley won the Del International in 68 and the Junior National title in 69.

Alan also represented NZ in four world surfing championships beginning with San Diego in 66. He eventually went on to become a world renowned surfboard designer and manufacturer on the Gold Coast and was runner-up in the 1981 Pipeline Masters behind Simon Anderson.

A valuable source of information on those early days can be found in club newsletters, “Surf-Side” edited by John Logan that were printed as short typed magazines. Some of the ongoing issues included: getting members to pay their subs; beach zoning at Waikanae; and club members being a bit cliquey, e.g. the Robert’s Road group, the girl’s group, and the VW group. It reads all too familiar; 50 years on and people are just the same, only the technology is different.

There were individual’s surf trips to Australia including Gail Patty and Marice Richardson getting great surf at Byron Bay and Noosa in 67. Likewise there were plenty of Aussies coming our way including Bob McTavish in 1966 who made boards under Bob Davie’s label. Bob Davie then left Gisborne to set up a board factory in Mount Maunganui. Not long after Alan Byrne and his parents Joined Bob to help in his new enterprise leaving Chris Ransley as their local salesman.

The club also got a letter from Aussie surf legend Snow CJ McAllister who had read a copy of “Surf-Side,” possibly given to him by a traveling Gisborne Local and was very impressed by the club activities and organisation.